Scars tell a story of damaged skin and an event that caused such trauma to the body. Scarring indicates that the wound has healed. In that sense, it’s like your body is telling you it’s put the past behind and it’s ready to move on.

But the body and the mind are two different creatures.

While physical scarring is rarely a health concern, it can affect one’s confidence. And on those summer days, or in the intimacy of one’s bedroom, they’re unflattering reminders where the body has been and can reduce once-sexy skin to an exterior that’s, well, scarred.

A scar treatment cream fades scars, including those that are still in formation and scars that are well-established. Having said that, a developing scar, typically within the first six months of the wound, stands the best chance of dramatic fading.

Scars: The Why and The How

Scars form when skin has been traumatized. The greater severity of the injury, the more likely the scar will be prominent. Common causes of scars include:

Striae, better known as stretch marks, are a common form of scarring caused by pregnancy, though scarring can take many shapes and be substantially more noticeable than the thin striations of stretch marks.

When skin is damaged, it goes through a four-stage healing process characterized by:

Hemostasis – During which blood clots over the wound

Inflammation – When the body removes bacteria, foreign particles and damaged cells from the wound

Proliferation – The point at which skin cells spread, covering the wound and a key role in the healing process

Remodeling – When the scar forms, with the new collagen matrix formed and cross-linked

This is a simplified telling of the scarring process, of course, and these stages can overlap at various points. Depending on the origin and severity of the injury, a scar can take two years to develop.

To visibly fade a scar, it helps to treat the wound while it’s still recovering. If you can apply a scar removal cream, like Dermefface FX7 Scar Reduction Therapy within three months of the injury, the greater your chance of minimizing the scar.

What to Look For in a Scar Treatment Cream

Scar treatment creams are products that incorporate antioxidants and botanicals with patented peptides like ProCollOne+ to stimulate natural collagen production, slough off dead skin cells and replace them with healthy, normal and, notably, undamaged skin cells.

A scar removing cream involves the subcutaneous, dermis and epidermis tissue. Working with the skin’s 28-day regeneration process, it’s designed to strike a delicate balance between the skin-strengthening collagen I and the skin-healing collagen III.

The latter point cannot be understated, because too much collagen can add size and discoloration to an already developing scar. Yet if there’s not enough collagen as the scar develops, the scar will be vulnerable to reinjury.

To achieve this balance of collagen production, it’s advisable to choose a scar reduction cream formulated with patented peptides, such as ProCollOne+, which is clinically proven to stimulate natural collagen production by up to 1,190%.

Also consider that antioxidants and natural moisturizers, including niacinamide, beta glucan and hydrolyzed soybean fiber can gently expedite the skin regeneration process, for optimum skin health and a vibrancy that can’t be achieved with laser treatments or steroids.

Should you be interested in a scar removing cream, consider Dermefface FX7 Scar Reduction Therapy by Skinception, which in addition to meeting the prerequisites described above, is reported to show visible reduction of scars after just four weeks of use.

People have scars. But it’s the physical kind that they try to hide with make-up and clothing.

To address this, there are scar reduction options, ranging from derma-brasion and laser surgery to steroids and filler injections that can flatten scars and make them less prominent.

Recently, the Skinception line of skin-care products has ventured into the market with a new product that capitalizes on their obviously considerable knowledge of natural active ingredients and patented peptides. Case in point, their anti-wrinkle cream, eye cream, anti-stretch mark cream and rosacea treatment.

Now Skinception offers Dermefface FX7 Scar Reduction Therapy to reduce or prevent scars and, as they claim, “fade scars like magic”. But does it deliver? 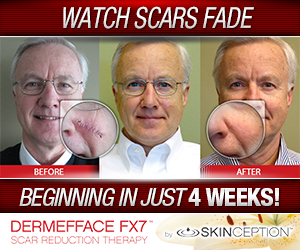 Dermefface employs natural active ingredients and moisturizers with patented peptides like their well-known Pro-Coll-One+. In that sense, you can consider Dermefface FX7 as a hybrid of natural skin care and modern skin technology.

The beta glucan is an obvious choice because of its long history as an anti-irritant. But it’s also an effective moisturizer and proven to stimulate natural production of collagen. Beta glucan also promotes health of macrophages â€“ the cells that destroy bacteria and remove dead or damaged skin cells.

Getting back to that Pro-Coll-One+, we shouldn’t forget that it’s clinically proven to stimulate collagen by up to 1,190%. Combine that with the Symglucan, Pentavitin and several other active ingredients and Dermefface FX7 has the goods to stimulate healthy human collagen fibroblasts, slough off dead skin cells and encourage normal, healthier skin cells to take their place.

A good set of ingredients is one thing, but it’s all for naught if they don’t work together and do what the manufacturer says it will do.

Fortunately, Dermefface FX7 comes with the Skinception name attached to its label, and as with most things Skinception, Dermefface delivers, in that it fades scars, according to the clients we’ve spoken with. And yes, it appears to work in as little as four weeks.

Dermefface FX7 markets itself as a treatment for both developing scars and those existing. Many clients using Dermefface use it for both of these reasons, and they’ve seen their scarring fade, though it tends to work better for a scar that’s still forming. It appears to work for existing scars as well, however, with visible reduction where people want it most.

The clients who’ve talked with us say they’re happy with the product – a non-greasy cream with a luxurious feel when applied to the skin.

The Skinception name offers plenty of value. As a general rule of thumb, the greatest savings with any Skinception product tend to be had with orders of three months or higher, often with gifts or extra product added as incentive to go long-term.

We think that’s wise, because skin problems like stretch marks and scarring aren’t fixed overnight. Skinception products show noticeable results in a reasonable amount of time, but the most dramatic improvements can take up to six months.

Skinception offers a one month supply of Dermefface at $59.95. Not exactly a bargain, but when you consider the luxurious formulation of Skinception products, which most clients rave about, seems a reasonable purchase. This includes both a loofah and a microderm exfoliator.

As with most Skinception products, the best value is for a longer term commitment. The Gold Package is a three month supply of Dermefface, the two exfoliators and a $25 gift card to Natural Health Source. The cost? $129.95

For the most value with Dermefface, go for the Platinum Package, which is a six month supply, two microderm exfoliators and the loofah, the Natural Health Source gift card and a savings of $160 off a one month supply. The cost of the Platimum Package, at $199.95, is a very respectable value, and we think, should be viewed as an investment to visibly fade scarring with a proven product.